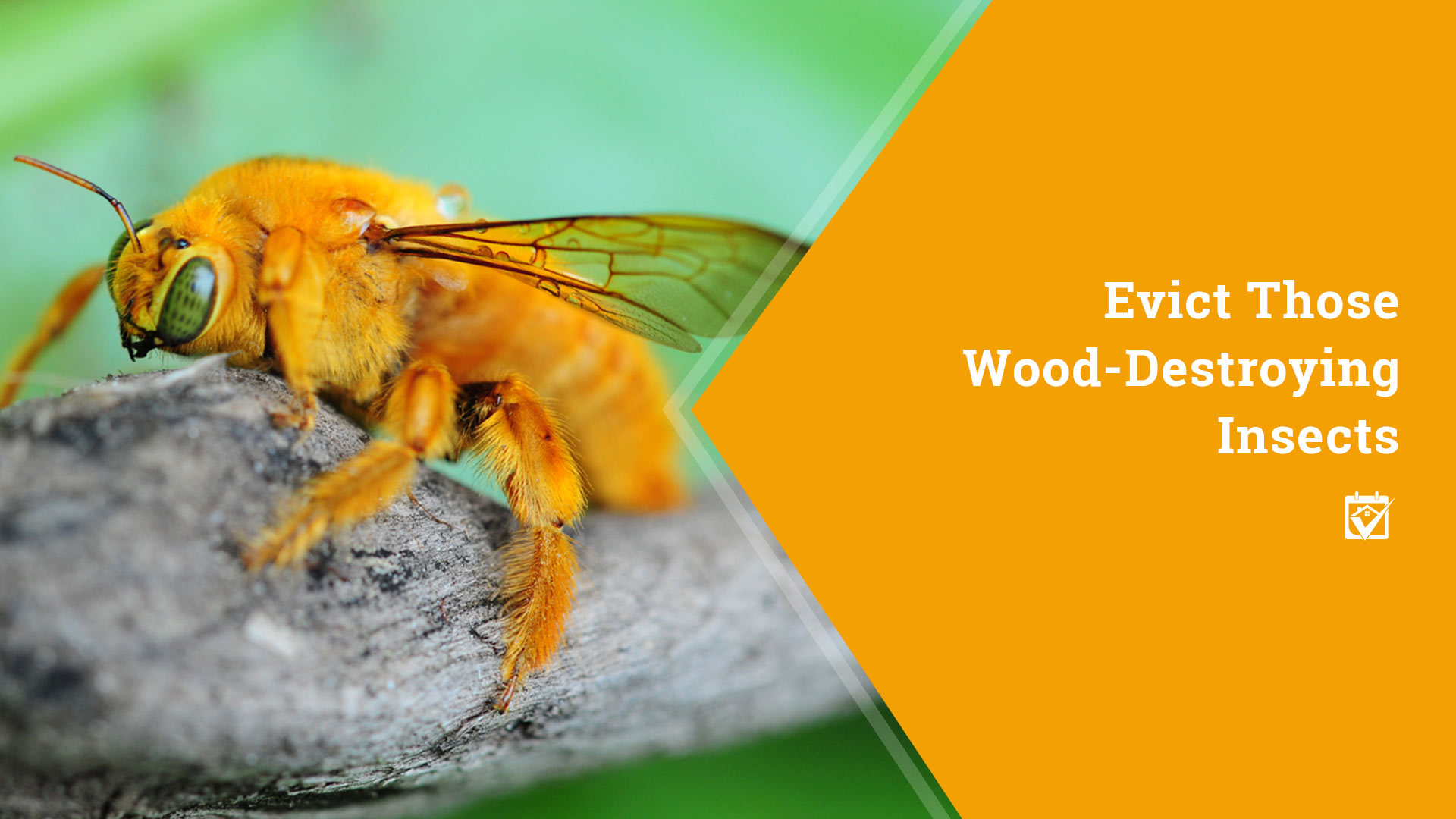 Unless you live in a cave, you’ve probably got some wooden bits on or around your house. In fact, the whole frame of your house is probably made of wood. It’s a great choice for framing, but it comes with one very specific weakness: bugs! Not just any bugs, but the kind that like to chew right on through studs and drill holes in eaves.

The horrible truth is that these insects are pretty much everywhere, so you have to always be on alert for them to pop up and attempt to take over your home. There’s nothing quite as unbearable as an unwanted house guest who won’t stop eating your house, you know?

These are the most common wood-destroying insects you’ll find inside:

These tiny, grey-brown beetles can go almost unnoticed for generations (beetle generations). Because they’re no bigger than a pencil eraser, the holes they drill in your house are also quite small and easy to miss. They could be anywhere, and unlike a lot of insects, powderpost beetles don’t necessarily need higher humidity or moisture to thrive. These little monsters tunnel through wood surfaces aggressively, leaving behind series of holes that resemble a shotgun pattern.

Evicting them can be extremely difficult, since simply varnishing over the holes they’ve created doesn’t do much to the beetles inside their tunnels and a whole-house fumigation only kills live beetles, not the eggs that are waiting to spring to life. You definitely need a pro if powderpost beetles are suspected.

The good news is that you probably don’t have carpenter ants right now. The bad news is that as your home ages and some part of your yard flattens just enough to allow water to puddle until it comes in contact with wooden parts, eventually rotting them out, they might find you. Carpenter ants don’t eat rotting wood, but they use the weakened areas as an entry point to hollow cavities like those between your interior and exterior walls, or even inside of hollow core doors. They won’t attack good wood, but if they’ve established a colony, their activities will cause the wood adjacent to them to begin to rot, so the problem spreads slowly across your home.

If you’re very patient, you can deal with a carpenter ant problem on your own. You’ll have to figure out where they’re living, first and foremost. Then you can begin leaving poison ant bait near the nest, making sure it’s always full, until the ants finally disappear. Using on-contact poison won’t help, since you’ll only kill the workers. The ant bait is carried back to the nest, where everyone inside enjoys a nice poisoned dinner every night until the whole bunch are gone. Repair the damaged wood as soon as the last ant gives up so that they have no incentive to return.

They look like jumbo bumblebees and are just about as terrifying, but instead of pollinating and stinging, the most visible of the carpenter bees, the male, has no stinger and basically spends his entire life hovering outside the nest of a special lady. When she comes out, she’s a smaller black bee, but chances are good that you’ll only ever see the male. He’ll divebomb you every time you go outside your home and attempt to attack anything that gets near the nest.

The female is the real problem, though. She nests inside exposed wood on the outside of your home. One carpenter bee isn’t such a big deal, but one means that more will follow and eventually those tunnels risk compromising the integrity of your home.

If you don’t have carpenter bees now, go ahead and run outside to paint or otherwise coat all your exposed wood. We’ll wait. If you do have carpenter bees, dusting the holes with a general insecticide can stop your problem in its tracks, but you’ll still need to plug the holes with cork or another suitable material and paint and seal the surfaces so bees don’t return. An alternative would be to wrap affected eaves or other outdoor pieces with aluminum to stop bee drilling all together (you still have to kill the bees, though).

Subterranean termites are the most common variety found in homes, causing 95 percent of all damage in North America. You’ll know you have termites if there are muddy tunnels stuck to walls or areas of wood that give with minimal pressure. There may also be a dust-like coating on wood that’s damaged. Another clear sign would be finding a pile of discarded wings in the springtime. This can indicate the termites have swarmed and are on their way to increasing their numbers. Termites will eat anything they can reach, they’re not an insect to mess about with.

Subterranean termites are encouraged by moisture, like what would be produced by a leaky pipe or plugged air conditioning condensation line. The limit of what you can do as a homeowner in most states is figure out where the termites are, then point to it for the termite exterminator. The chemicals involved are quite noxious, requiring a license to handle. Once the termites are gone, though, you can prevent reinfestation by eliminating contributing moisture and repairing any termite damage that has already occurred.

Who You Gonna Call? A Pest Control Expert!

When you run into a bug that you’re not able to beat, either because it’s a persistent little bugger with no job or responsibilities, or because the tools you really need are locked behind a licensing process, it’s time to call in a pro. But don’t worry, the HomeKeepr community has you covered — your Realtor has already recommended the best pest control pros in the area and they’re just waiting for your call.